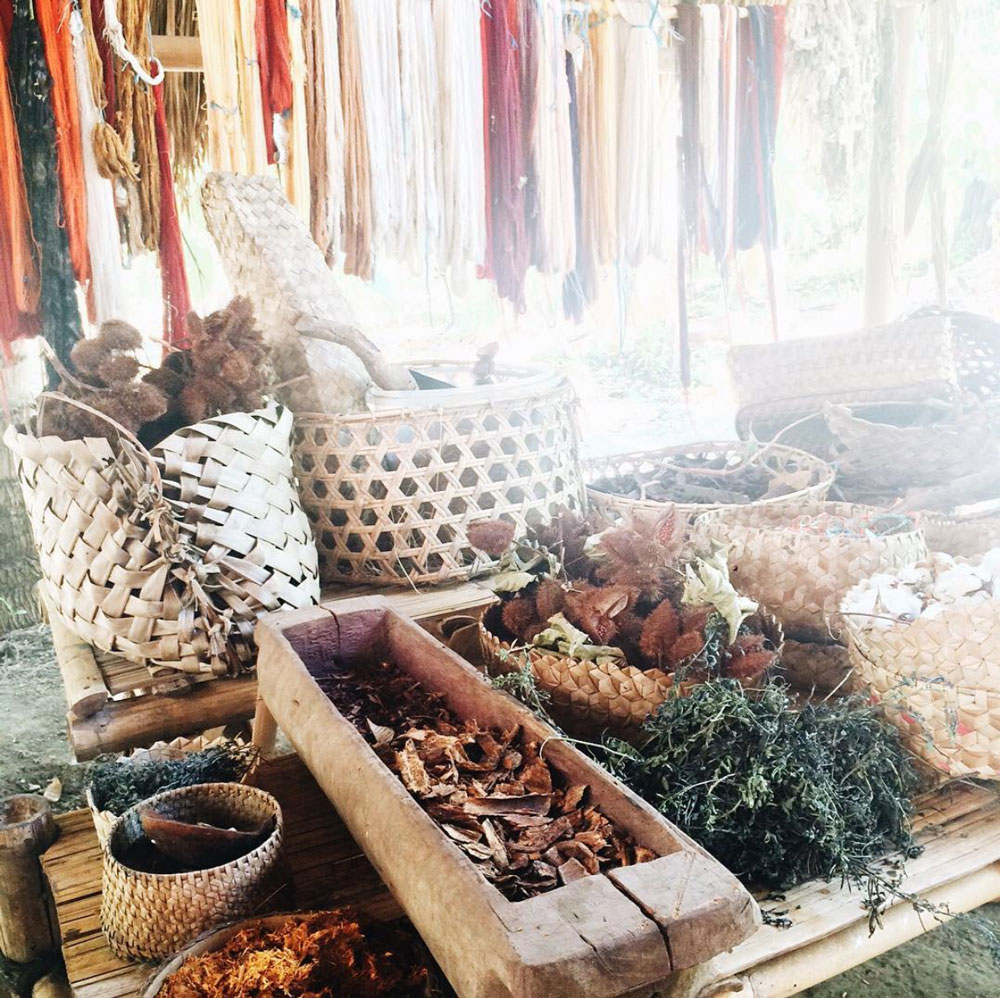 Natural dyes are dyes or colorants derived from plants, invertebrates, or minerals. The majority of natural dyes are vegetable dyes from plant sources—roots, berries, bark, leaves, and wood—and other biological sources such as fungi and lichens.

Archaeologists have found evidence of textile dyeing dating back to the Neolithic period. In China, dyeing with plants, barks and insects has been traced back more than 5,000 years.[1] The essential process of dyeing changed little over time. Typically, the dye material is put in a pot of water and then the textiles to be dyed are added to the pot, which is heated and stirred until the color is transferred. Textile fibre may be dyed before spinning ("dyed in the wool"), but most textiles are "yarn-dyed" or "piece-dyed" after weaving. Many natural dyes require the use of chemicals called mordants to bind the dye to the textile fibres; tannin from oak galls, salt, natural alum, vinegar, and ammonia from stale urine were used by early dyers. Many mordants, and some dyes themselves, produce strong odors, and large-scale dyeworks were often isolated in their own districts.

Throughout history, people have dyed their textiles using common, locally available materials, but scarce dyestuffs that produced brilliant and permanent colors such as the natural invertebrate dyes, Tyrian purple and crimson kermes, became highly prized luxury items in the ancient and medieval world. Plant-based dyes such as woad (Isatis tinctoria), indigo, saffron, and madder were raised commercially and were important trade goods in the economies of Asia and Europe. Across Asia and Africa, patterned fabrics were produced using resist dyeing techniques to control the absorption of color in piece-dyed cloth. Dyes such as cochineal and logwood (Haematoxylum campechianum) were brought to Europe by the Spanish treasure fleets, and the dyestuffs of Europe were carried by colonists to America.

The discovery of man-made synthetic dyes in the mid-19th century triggered a long decline in the large-scale market for natural dyes. Synthetic dyes, which could be produced in large quantities, quickly superseded natural dyes for the commercial textile production enabled by the industrial revolution, and unlike natural dyes, were suitable for the synthetic fibres that followed. Artists of the Arts and Crafts Movement preferred the pure shades and subtle variability of natural dyes, which mellow with age but preserve their true colors, unlike early synthetic dyes,[1] and helped ensure that the old European techniques for dyeing and printing with natural dyestuffs were preserved for use by home and craft dyers. Natural dyeing techniques are also preserved by artisans in traditional cultures around the world.

In the early 21st century, the market for natural dyes in the fashion industry is experiencing a resurgence.[2] Western consumers have become more concerned about the health and environmental impact of synthetic dyes in manufacturing and there is a growing demand for products that use natural dyes. The European Union, for example, has encouraged Indonesian batik cloth producers to switch to natural dyes to improve their export market in Europe.[3]